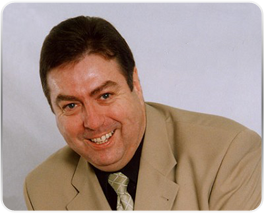 Rod has been involved in the entertainment world for over twenty years now. An international artiste, he has performed in Holland, Germany, Spain, the Balearics, Rhodes, Cyprus and Corfu. Rod is a regular on the armed forces circuit, performing not only to British but also USA and Canadian NATO troops.

Rod’s comedy is often drawn from the experience of life, with expert delivery of quick-witted one-liners, and topical material. Rod is an ideal choice for mixed audiences, but he also has the ability to tailor his material for any given situation.

‘If it’s laughter you’re after’ says Rod Beech’s promotional material and, having seen him perform that is fair comment. He raises enough laughs to please most without having to try to hard, and he is a shrewd judge of an audience. A likeable character with original material.
Derek Smith – National critic for the Stage & T.V Today.

In the right surroundings this comedian is a knockout, for he is topical, witty, ribald and more than halfway to being ‘alternative’. He produced a very professional performance.
Peter Hepple – National critic for the stage and tv today.

Comedian ROD BEECH gave a really polished performance, loads of new gags and very topical too. He went down extremely well. he is surly one of the best comedians we have seen at the club.
Geoff Starkey – The Old Oscott club,in the Midlands club review.